Asa Live In Lagos – Everything You Missed At The Concert

It was a night to remember on Sunday May 1, 2016 at the prestigious Eko Hotels and Suites in Victoria Island, Lagos State of Nigeria as one of Nigeria’s biggest exports, Bukola Elemide popularly known as Asa performed live on stage to the her fans. 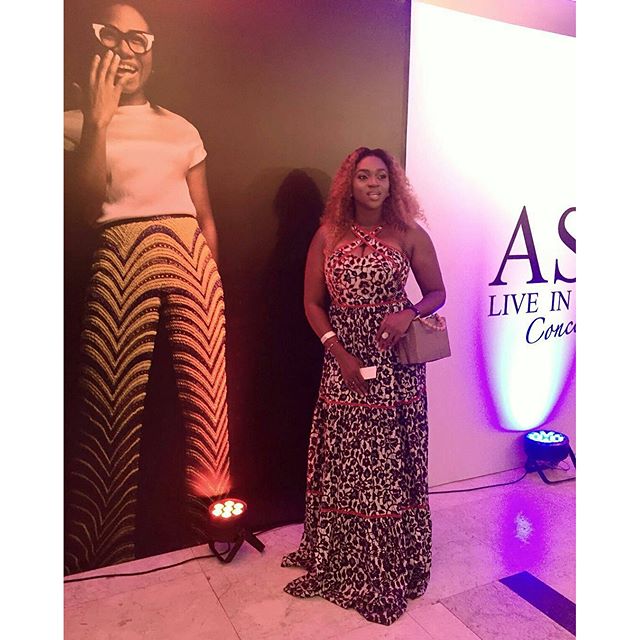 Red carpet started for 6:00pm and the show kicked off officially at 19:51 pm with Isaac Geralds who was the first performer. He performed his original song ‘Fall in Love’ and the audience loved it.

The concert had delightful performances from Kaline.

Falana came on stage at 20:21 pm. See her performance below;

Asa gave an electrifying performance with different songs from all her albums. Asa opened her performance with the ballad “Awe” off her eponymous first album. The excited audience cheered endlessly and sang along, word for word, line after line. The response was deafening, and the excitement was palpable.

The response from the audience only got louder as Asa delivered intense performances of “Satan Be Gone” and “The One Who Never Comes”. At some point, she picked up a trumpet and displayed a mastery of the instrument that simply stunned the audience. As soon as the hugely popular “Fire On The Mountain” came on, the audience rose to its feet and sang out loud. “Bibanke” came next and the momentum continued.

One of the highlights of the night was when songwriter/music producer par excellence Cobhams Asuquo, who produced Asa’s debut album, joined her on stage and took over the piano. Together, they performed a cover of Beyonce’s “Halo”. The hall fell silent initially and then erupted in a frenzy as the duo displayed an amazing musical synergy.

Asa performed for two hours, keeping the energy levels in the hall high and the audience singing along with her. It was full of emotions, religion, magic filled in the air and she brought her A game on stage.

There was singing, dancing, live instrumentation and magic all round. The audience sang until they lost their voices, and Asa simply went on.

By the end of the event, Asa had delivered more than what she promised. The audience was blown away.

Asa introduced her band members and gave her vote of thanks to those who supported the dream. The show ended at 23:45pm.

The Asa Live In Lagos concert has not just raised the bar, it has set the bar perhaps too high. It was truly an extraordinary event; a night never to forget.

So far, it’s been one of the best show organised in Lagos.