On the 21st of September 2016 Aquila Records held a press conference and an official Unveiling Party to introduce to the public the new addition to the family.

Real names Ayomide Oluwasegun Odebunmi, Airboy is a Nigerian born recording artiste, songwriter and performer. He started his music career in 2013 and has since released couple of songs to the delight of his fans before joining Aquila Records.

The label introduced Airboy, not just by unveiling his identity to the public but also with the release of his first song on the label. The song, produced by Aquila resident producer Phantom and mastered by Suka is titled Ayepo, and it is a jolly one that preaches hard work and merriment, on a perfect blend of Pop, Jazz and Afro Fusion.

The Unveiling event which was hosted by Olisa Adibua and Special Ed (Spesh) took place at luxury nightclub Quilox. It kicked off with the identity of the new signee still unknown till the label Chairman, Shina Peller made the announcements and introduced Airboy to all. Airboy in turn brought his A-Game to deliver back to back adrenaline-packed renditions of his new song. 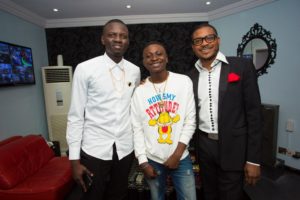 The video to Ayepo which was shot by director Sesan of Film Factory Production Company was also exclusively premiered on the night. It is expected to officially hit the internet and TV in another day or two.

When the label boss Shina Peller was asked why he signed the act, he said: “This is a young boy that has been under my tutelage for about 8 months now and I can tell you I love his zeal towards work and his willingness to learn and better his best every single time. Most of all, he is distinctively UNIQUE.”

Some of those in attendance to witness this special day include label mates Que Peller and Base One, as well as Lil Kesh, Reekado Banks, Tillaman, Tekno, B Red, Chairman HKN, Nelson Jack, Matthew Ohio, Terry Apala, DJ Lambo, among others.

This is the beginning of a new journey for a young raw talent and the third wheel for Aquila Records. Its safe to say Airboy is the future!

AYEPO is also available on iTunes as well as other online media stores: https://itun.es/ng/y607eb