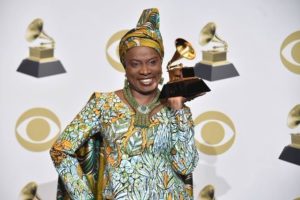 Four-time Grammy Award winner Angélique Kidjo was born in Ouidah, Benin on July 14, 1960, to a Beninese father and Yoruba mother. The singer-songwriter, actress, and activist started performing with her mother’s theatre troupe when she was only six.

She started to become successful after her adaptation of Miriam Makeba’s “Les Trois Z” played on national radio. This happened when she was a teenager.

Next, she recorded the album ‘Pretty’ with the Cameroonian producer Ekambi Brilliant and her brother Oscar. She became more famous when she started touring all over West Africa performing songs from this album.

The singer, who is fluent in five languages including French, Yoruba, and English, has gone on to release over 10 albums so far.