6ix9ine Will Be Off House Arrest Next Week 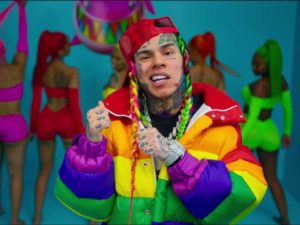 American Rapper Tekashi 6ix9ine is on track to becoming a free man in the next few days.

Today (July 30) marks three days until the end of 6ix9ine’s prison sentence, which he’s been serving at home for the last few months. Nearly two years after the 24-year-old rapper pleaded guilty to nine counts of federal racketeering and firearms charges, he is expected to be released from house arrest this Sunday (Aug. 2).

6ix9ine was arrested and taken into federal custody on the racketeering and firearms charges and faced 32 years to life in prison.

Two months later, in Dec. 18, 2019, 6ix9ine was sentenced to 24 months behind bars. Tekashi cut a deal with the federal government to receive a lighter sentence by testifying against his former Nine Trey Gangsta Bloods associates.

In April of this year, Tekashi was granted a compassionate release from Judge Paul Engelmayer due to the coronavirus pandemic posing a threat to his health. The rapper suffers from asthma, so his medical condition would have made it difficult for him to fight the virus, had he contracted the illness.

Since being released to serve the remainder of his sentence on home confinement, the rhymer has released two new singles —‘Gooba’ and “Trollz” featuring Nicki Minaj and broke the top 10 on the Billboard Hot 100 each time.