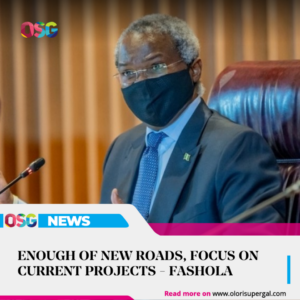 The Minister of Works and Housing, Babatunde Fashola, has said the government at all levels and Nigerians must rise against heavy-duty trucks damaging the nation’s roads, describing it as ‘a big problem’.

Fashola, while appearing before the House of Representatives’ Committee on Works in Abuja on Wednesday to defend the 2022 budget proposed by his ministry, said the vehicles – tankers and trailers – often loaded more than the regulated capacity.

The minister also decried that while more road projects were being introduced, the personnel and allocation to the ministry had remained the same.

He urged members of the National Assembly to agree on reducing their demands for road rehabilitation under their Zonal Intervention Programme popularly known as constituency projects.

He said, “The number of projects is increasing and all of us must find a way to come to a consensus because our revenues are not increasing at the same experiential rate, and what we are seeing every year is that we appropriate a very token amount for a project of a certain quantum. And then, once the award is done, the question of financing becomes a challenge.

“With the inflation and everything, there must come a time when we can say – and I think that time is now – enough of new roads and new projects.

“Let us concentrate our limited resources to complete or progress some of what we have started.

“If the parliamentarians from each state can come together and say, ‘this is one priority project for us, let us move our zonal intervention projects’ and say ‘this is what we want to achieve;’ it is an honest conversation we must have.

“That is one solution; there may be others. They include finding ways to increase the revenues of the government because some of the ways that these have been supplanted have been borrowings and deficit budgets, and they have become a matter of concern in the public space.”

The minister was asked about weighbridges across the country to check the damage on the federal road network, two of which are being rehabilitated in Lagos – in Ojota and Owode Onirin.

The lawmakers had warned that the ‘most intensive axle loading’ from the Lagos ports could damage the newly rehabilitated Lagos-Ibadan Expressway if left unchecked.

Responding, Fashola said, “We have a very big problem as a people and as a country about compliance on axle load and tonnage.

“Some people are doing business at the expense of everybody. What they should carry – 60 to 70 tonnes in three trucks, they are cheating by loading onto one truck and they are destroying our common assets.

“We need to rise up as a nation – not just the government – to put an end to it; let people just do the proper thing.”

The minister added, “We sought the approval of Mr. President after we subscribed to the ECOWAS treaty, to start implementing and he approved that enforcement should be done from the largest loading points, which are the ports and NNPC depots.

“In the ports, some of the problems we found out are that the concessioners – the private sector who are operating the ports – had a significant number of their weighing instruments un-calibrated. So, we have been working to remedy that.”