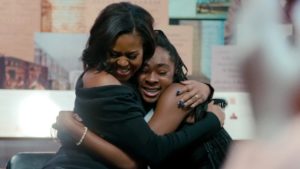 She announced on Monday via her Twitter page that the doc, also titled Becoming, will take viewers behind-the-scenes of the former First Lady’s 24-city book tour. It will debut on May 6.

I’m excited to share that on May 6, @Netflix will release BECOMING, a documentary directed by Nadia Hallgren that shares the stories of the amazing people I met after the release of my memoir. During this difficult time, I hope you’ll find some inspiration and joy in this film. pic.twitter.com/fqsIbhXYeL