Footballer, Colin Kaepernick is the face behind the be Nike campaign. “Believe in something, even if it means sacrificing everything”.
Those are the strong and empowering words used in Nike’s 30th anniversary of their iconic “Just Do It” campaign.
The (American) football player has been discriminated against and hasn’t been able to sign for a new team after his racial injustice protest of kneeling to the American National Anthem saw him out of his contract. 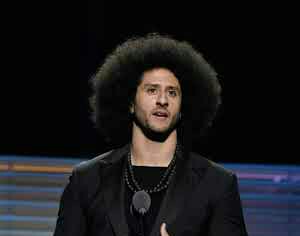 Nike signed Kaepernick in 2011 and kept him on the endorsement roster. Now, as the former NFL quarterback is suing NFL owners for allegedly colluding to keep him out of the league, it is a particularly powerful time for him to front a campaign with this message.

TYLER PERRY REMEMBERS HIS MOTHER WHO DIED 9 YEARS AGO