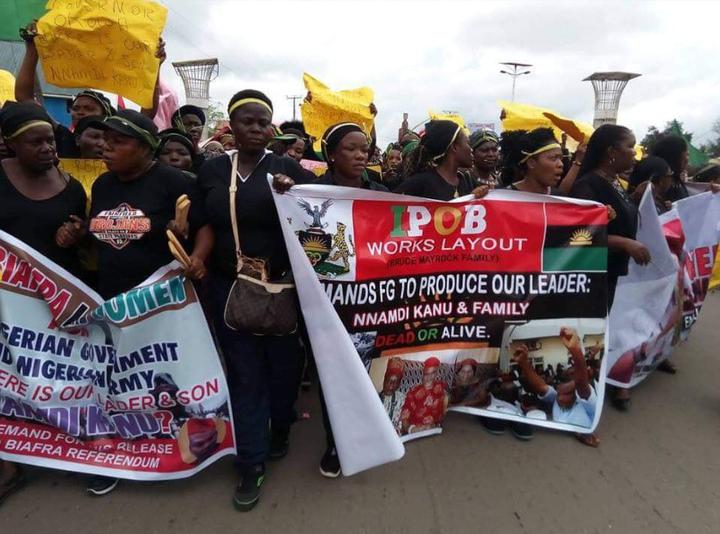 The Indigenous People of Biafra (IPOB) have declared general strike across the South-east and South-South geo political zones and other areas where Biafrans resides on September 14 in honour of those killed in the struggle for the restoration of Biafra Independence since 2015.

The group stated that inhabitants of the two geo-political zones and other conscientious Biafrans living in other parts of the country and the world over are required to stay indoors on that day and away from work or other daily business activities throughout the day.

The strike will serve as a protest to show their anger regarding men and women killed at Afaraukwu in Umuahia during Operation Python Dance II on September 14, last year, as well as those killed in Ngwa, Aba, Igweocha (Portharcourt) and buried in unmarked mass graves as a result of the military invasion of Biafraland by the Nigerian Army.

Read the statement from the Media and Publicity Secretary, Emma Powerful which explain reasons for the strike:

“As a result of ongoing campaign of ethnic and religious persecution, genocide and humiliation of the people of Biafra in general and Igbo people in particular by this Buhari regime, culminating in the abominable incarceration of innocent mothers, grandmothers and great grandmothers in Owerri prisons, we the Indigenous People of Biafra (IPOB) do hereby declare 14 September 2018 a day of general strike, mourning and resistance across Biafraland.”

“Inhabitants of South East/South South and all conscientious Biafrans living in other parts of Nigeria and the world are required to stay indoors away from work or daily business activities throughout the day of the 14th of September 2018 to register our anger and protest regarding the men and women killed at Afaraukwu in Umuahia during Operation Python Dance II on September 14 last year, those killed in Ngwa, Aba, Igweocha (Port Harcourt) and buried in unmarked mass graves as a result of unprovoked military invasion of Biafraland by the Nigerian Army.

“We shall also remember all those killed in the struggle for the restoration of Biafra independence since August 2015 when the army shot dead Mr Okafor in Onitsha on a peaceful march from Nkpor to Onitsha main town. Their sacrifice will neither be forgotten nor will it be in vain, because come what may, this generation of IPOB must and will restore Biafra.

“The sacrilegious and disgraceful humiliation of Igbo women, some of them great grand-mothers, ranks as one of the most abominable act of desecration ever visited upon the land of Biafra in recorded history. It will mark the defining event that completed the shame and humiliation of the Igbo race.”

“The cowardice and impotency of Igbo socio-political and cultural leadership in the face of such humiliation by a single Fulani police officer in Owerri is confirmation, if one is needed, that South East and South South regions are conquered territories and vassal colonies of the Sokoto caliphate.

“Nationwide general strike observed as a sit-at-home across Biafraland on the 14th of September 2018, is the only way we Biafrans can honour our fallen brethren and legitimately remind our northern oppressors and their collaborators in our midst that enough is enough!

“We do not want another Operation Python Dance or another mass murder of Biafra agitators and humiliation of our mothers in our land. Biafraland we state categorically must emerge a free nation under God, whether our enemies like it or not.

“What happened at Afaraukwu; the desecration of house of a traditional ruler, the slaughter of innocent men and women: the wholesale massacre along the Ngwa segment of Enugu-Igweocha (Port Harcourt) Expresswa, countless number of mass graves across Biafraland, is repulsive, inhumane, barbaric and worthy of total condemnation by all right thinking people. We wait the day United Nations and other world bodies will give the issue of Biafra the same level of prominence it is giving Rhohingya”.

EHIZ, MAYORKUN, LOTA CHUKWU, OTHERS TURN UP FOR THE BASEMENT GIG