Actress, Uche Elendu Gives Thanks To God As She Narrowly Escapes Death 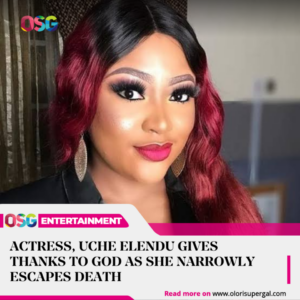 Nollywood actress, Uche Elendu took to social media to share her near-death experience on a flight from Lagos to Asaba, which crashlanded in a remote area.

The 38-year-old mother of two also expressed appreciation to God for sparing her life. She stated that her covenant with God is strong.

She recounted how one of the crew members spoke negatively about the plane crashlanding while she blasted the airline for not being remorseful over the incident.

“My flight Arik air Lagos to Asaba just crashlanded in a remote area, we were 10 mins to Asaba but the gear failed the pilot had to reverse to Lagos…I’m on a 20 minutes bus ride to the terminal now. Not a word of Apology from the crew. My God is a great God!! what God cannot do does not exist!! Thank God for me ooo

“What God cannot do does not Exist!!!! My convenant with God is strong and He never lies!! Thank you Jesus!!

“Arik God punish you and your ill mannered crew with demonic tongues. The male air host told me at the beginning of the flight that I should put my box under the chair, that it will save me in case of a crash, I said stop talking negatively, we will not crash in Jesus name!!! only Jesus can save me!!!

“He said there’s nothing like Jesus keep fooling yourself and I said to him, Only a FOOL says there’s no God. They freaking knew the aircraft was faulty!! Damn!!!!! Bring out my luggage let me go catch another flight. Lousy Bunch.”