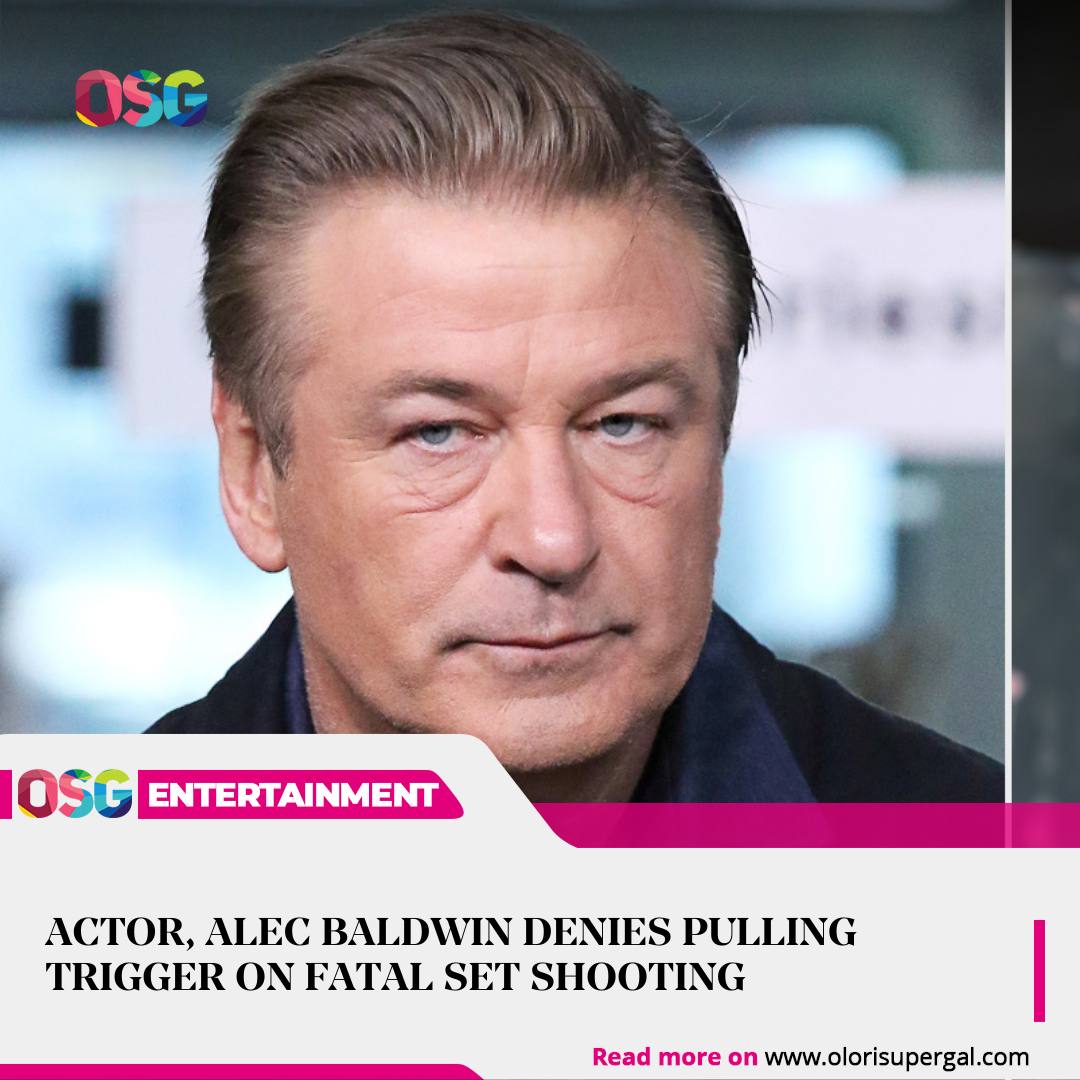 Hollywood actor, Alec Baldwin, has denied responsibility for the fatal shooting of a cinematographer on the set of his Western movie “Rust”.

In his first public interview on ABC News with George Stephanopoulos, the actor said he did not pull the trigger on the gun he was holding during a rehearsal, and that he did not think he would be criminally charged in the case.

“I feel someone is responsible for what happened, but I know it isn’t me. I might have killed myself if I thought I was responsible, and I don’t say that lightly,”

Cinematographer Halyna Hutchins was killed and director Joel Souza was wounded when the gun fired off a live bullet.

The incident, including how live ammunition made its way to the set, is still being investigated by authorities in New Mexico. No criminal charges have been filed.

Baldwin had been told the gun was “safe” by crew members in charge of checking weapons.

He said “I’ve been told by people in the know… that it is highly unlikely I would be charged with anything criminally. I would never point a gun at anyone and pull a trigger at them.”

The fatal shooting took place on October 21 near Santa Fe, N.M., on a movie set designed to be a church. Mr. Baldwin was practising drawing an old-fashioned revolver that he had been told contained no live rounds when it suddenly fired, killing the film’s cinematographer, Halyna Hutchins, 42, and wounding its director, Joel Souza, 48.

Mr. Baldwin said that he was stunned by what happened and that at least 45 minutes passed after the gun went off before he realized that it could have contained a live round.

“I stood over her for 60 seconds as she just laid there kind of in shock,” Mr. Baldwin said.

The actor added that he did not cock the hammer of the gun, but pulled it back as far as he could and let it go in an action that might have set it off.

Investigators are seeking to determine how a live round got into the gun that Mr. Baldwin was practising with, why the crew members who inspected it on set failed to notice, and why the gun fired.

As detectives work to trace the source of the live round, one focus has been on Seth Kenney, who supplied blanks and dummy rounds for the production.

According to court documents filed on Tuesday, detectives are trying to determine whether Mr. Kenney sent live ammunition as well as blanks and dummies, and they have searched his business in Albuquerque, PDQ Arm & Prop.

Mr. Kenney said in an interview that he was confident he was not the source of any live round.

“It is not a possibility that they came from PDQ or from myself personally,” he told “Good Morning America.”

Since the fatal shooting, two crew members who were in the room when the gun went off have filed separate lawsuits, naming Mr. Baldwin, the film’s producers, and other crew members including Mr. Halls and Ms Gutierrez-Reed as defendants.

Both lawsuits say Mr. Baldwin should have checked the gun himself to see whether it was safe to handle.

In the interview, Mr. Baldwin said that on the day of the shooting, one of the plaintiffs touched his shoulder and said he bore no responsibility for what happened.

Mr. Baldwin declined to say which plaintiff it was. Serge Svetnoy, one of the crew members who filed suit, told ABC that he did say that to Mr. Baldwin but later changed his mind.

The actor insisted that the tragedy occurred after he was handed the gun and was told it was safe, and that Ms Hutchins herself had told him how to position it. Both he and Ms Hutchins assumed the gun was safe to handle, he said.

He added that “I am holding the gun where she told me to hold it,” Mr. Baldwin said. “I can’t imagine I’d ever do a movie that had a gun in it again”.