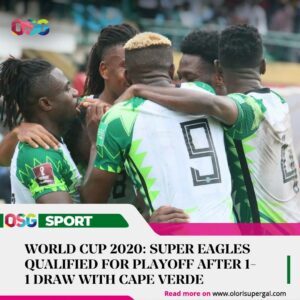 The Super Eagles will know their playoff opponent for the 2022 World Cup play-offs after finishing top of Group C in the qualifiers on Tuesday night, 16 November 2021.

Super Eagles coach, Gernot Rohr’s charges progressed into the playoff round following a 1-1 home draw against the Blue Sharks of Cape Verde at the Teslim Balogun Stadium, Lagos.

The Super Eagles joined nine other African countries in the final round of the qualifiers.

The top five seeded teams on the continent; Senegal, Morocco, Algeria, Tunisia, and Nigeria could draw any of the five teams who are not seeded.