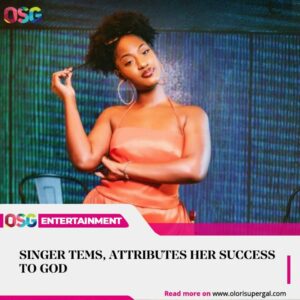 In an interview with Apple Music’s Africa Now Radio With Lootlove, the 26-year-old star said,

“I don’t really think everything is because of me. I know that I’m talented and I have a great music sound. But honestly, it’s more than that, it’s more than just the music and there’s so many people involved and honestly, God has been in control of everything and I just like to live my life. So I don’t even think of it. I just see it as such an exciting life that I’m enjoying, rather than like trying to control it or take all the credit.”

She also described her experience working with Canadian rapper and singer, Drake, as being unbelievable. She said,

“Honestly, it’s unbelievable. When I said I wanted to work with Drake, I just said it. I wasn’t thinking about it. I used to listen to Drake all the time when I was in high school and growing up and it was just the first thing that came to my mind. And for me to actually meet him, work with him, it was just crazy. That is a full testament to God’s blessings. I can’t quantify how grateful I am because it’s not anything I did. I’m just making music and it seems I’m attracting all these people and I’m just so grateful.”

Speaking on why she titled her Extended Play album, If Orange Was A Place, the singer, who recently snagged a deal with RCA Records, said, “Orange is my favourite fruit. And if you find a very sweet orange and you really dig into it, it’s just busting with brightness, colours, and warmth. It’s just a blast of excitement and the word ‘orange’ reminds me of sunset and sunrise. The EP is really the different shades of orange. And it’s really the different shades of me.

Speaking on her achievement so far, she said,