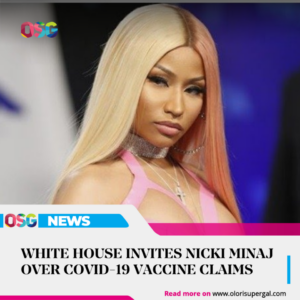 Trinidadian-born rapper, singer, and songwriter, Onika Tanya Maraj-Petty, better known as Nicki Minaj has been invited by the White House to discuss her Covid-19 vaccination claims.

It all began when Nicki Minaj tweeted that someone’s testicles in Trinidad and Tobago got swollen after he received a jab of a COVID-19 vaccine.

“My cousin in Trinidad won’t get the vaccine cuz his friend got it & became impotent. His testicles became swollen. His friend was weeks away from getting married, now the girl called off the wedding. So just pray on it & make sure you’re comfortable with ur decision, not bullied.”

Trinidad and Tobago’s Health Minister Dr. Terrence Deyalsingh, said Nicki’s tweet to her more than 22 million followers, sent the Island nation on a wild goose chase as they tried to track down the man who she said became impotent and lost his fiance after receiving a dose of the vaccine.

Deyalsingh said, “Unfortunately we wasted so much time yesterday running down this false claim.

“As far as we know at this point in time, there has been no such reported either side effect or adverse event. And what was sad about this is that it wasted our time yesterday trying to track down because we take all these claims seriously, whether it’s on social media or mainstream media”.

A White House official in a statement on Wednesday night said “As we have with others, we offered a call with Nicki Minaj and one of our doctors to answer questions she has about the safety and effectiveness of the vaccine”.

Also on Wednesday, Nicki Minaj tweeted that she had been invited to the White House to discuss her vaccination claims.

“The White House has invited me and I think it’s a step in the right direction.

“I’ll be dressed in all pink like (the film) Legally Blonde so they know I mean business.

“I’ll ask questions on behalf of the people who have been made fun of for simple being human.”

US Gymnasts Slam FBI And US Sports ...