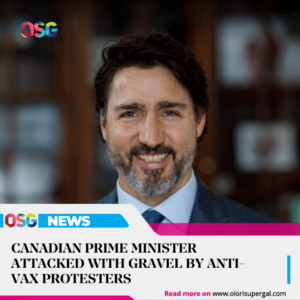 Canadian Prime Minister, Justin Trudeau was attacked with gravel during an anti-vaccine protest at his campaign stop in London, Ontario, on Monday.

The minister who is up for reelection was campaigning ahead of the country’s September 20 general election .

Trudeau currently faces wide opposition to his decision to require all federal civil servants and all domestic air or train passengers to be vaccinated, unless medically exempt.

Anti-vax protesters have appeared at several of his campaign stops, including those held this past week in Welland and Newmarket, both in Ontario.

His campaign event scheduled for Bolton, Ontario, in late August was abandoned after Canadian officials decided that the protesters posed a security threat, CBC reported.

On Monday, Trudeau said he “won’t back down” on his promise, despite opposition from what he called the “anti-vaxxer mobs,”