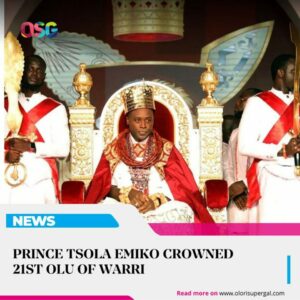 The ceremony took place at Ode-Itsekiri, the ancestral home of the Itsekiris in Delta State.

Before the coronation, a boat regatta was held on the Warri River. The selection of a ceremonial sword by the Olu while being blindfolded was also witnessed at the event. He picked the sword with the title, Atunwase. His father was Ogiame Atuwatse II.