Sojourner Truth was the first black woman to win a case against a white man in 1828. 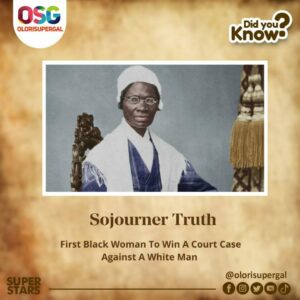 She was born Isabella Baumfree in 1797 to enslaved parents James and Elizabeth Baumfree, in Ulster County, New York.

Around age nine, she was sold at an auction to John Neely for hundred dollars, along with a flock of sheep. At age thirteen, she was sold three more times and subjected to harsh physical labor and violent punishment.

She ended up at the home of John Dumont and his wife Elizabeth in West Park, New York.

Around age 18, Isabella fell in love with an enslaved man named Robert from a nearby farm. However, they were not allowed to get married because they had separate owners.

Instead, she was forced to marry another slave named Thomas, owned by Dumot.

They had five children together- James, Diana, Peter, Elizabeth, and Sophia.

In the 19th century, New York started legislating emancipation, however, it would take over two decades for liberation to come for all enslaved people in the state.

In the meantime, Dumont promised Isabella he would grant her freedom on July 4, 1826, “if she would do well and be faithful”. When the date arrived, he refused to let her go.

She, however, escaped with her infant daughter, in a disheartening choice, she left her other children behind because they were still legally bound to Dumont. She made her way to New Paltz, New York, where she and her daughter were taken in as free people by Isaac and Maria Van Wagenen.

Dumont moved to reclaim Isabella as his property, however, the Van Wagenen’s offered to buy Isabella’s freedom from him for twenty dollars, until the New York Anti-Slavery Law emancipating all enslaved people took effect in 1827.

In 1828, Dumont illegally sold Isabella’s five-year-old son, Peter, to a white man in Alabama. With the help of the Van Wagenen’s, she filed a lawsuit to get him back and months later, Isabella won her case and regained custody of her son.

She became the first Black woman to sue a white man in a United States court and win.

She became a Christian and in 1829, she worked as a housekeeper for evangelist Elijah Pierson.

She left three years later to work for another preacher Robert Matthews.

However, when Elijah Pierson died, Isabella and Matthews were accused of theft and murder. Though they were later acquitted.

Isabella’s stay among Christians intensified her desire to preach and win converts. she believed her religious obligation was to go forth and speak the truth, with this in 1843, she changed her name to Sojourner Truth: