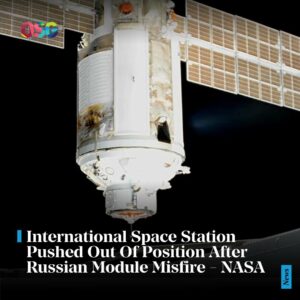 The International Space Station (ISS) was pushed out of position, after engines of a newly-arrived Russian module inadvertently fired up, NASa officials said.

According to NASA and Russian state-owned news agency RIA, the seven crew members aboard – two Russian cosmonauts, three NASA astronauts, a Japanese astronaut and a European space agency astronaut from France – were never in any immediate danger.

The malfunction happened several hours after Nauka module docked with the ISS on Thursday, following an eight-day flight.

NASA tweeted that “the module’s thrusters started firing at 12:45pm ET (16:45 GMT) inadvertently and unexpectedly, moving the station 45 degrees out of attitude”.

It added that “recovery operations have regained attitude” and that “the station is back in attitude control and is in good shape”.

Communications with the ISS crew were lost for several minutes during the incident. However. they “really didn’t feel any movement” as the space station pitched at half-a-degree a second.

The mishap has prompted NASA to push back an uncrewed test flight of Boeing’s Starliner spacecraft to the ISS from 30 July to at least 3 August.

El-Zakzaky And Wife Released By Court, After ...