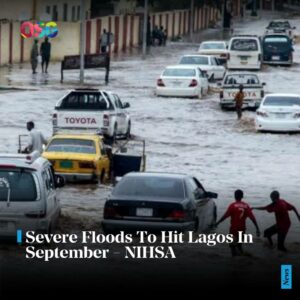 The Nigeria Hydrological Services Agency (NIHSA) issued a warning on Sunday, about the floodings, that will hit Lagos State in September.

This comes, following floods that hit several regions of the state, on Friday, leaving commuters stuck in gridlock, after over four hours of rainfall.

The agency, noted that no new holding dam had been constructed across the River Niger in Nigeria and the course of the Ladgo Dam in Cameroon to mitigate the impact of flood arising from the possible opening of the dam.

Clement Nze, the Director-General, NIHSA, told the Punch correspondent that a dam was being designed by experts for that purpose ahead of the actual budget preparation for the facility.

Cameroon had advised Nigeria to build holding dams across River Niger and the course of the Ladgo Dam so that the annual release of water from the facility would not cause damage in Nigeria as witnessed in 2014 and 2016.

Nze stated that the peak of the rainy season in Lagos often occurred in September, adding that residents of the state should brace for severe floods by taking all necessary measures now to mitigate the devastating impact.