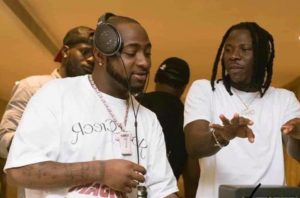 Davido has confirmed he and Stonebwoy have worked on a new song.

The two artistes were spotted in a studio on Saturday in Ghana. And they recorded a song, which they promised fans months ago.

Davido was in Ghana for the weekend and seized the opportunity to record the song.

The song will be the first collaboration between the two. According to Stonebwoy, they recorded a song together but he lost the file.

To Avoid Possible Breakdown, Nigerian Must Be ...