America’s oldest living president, Jimmy Carter has added another year to his remarkable life as he turned 96 today, 1st October, 2020. 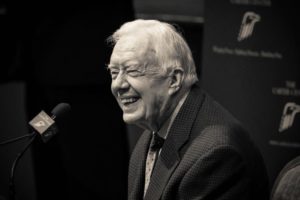 Jimmy Carter was elected president in 1976 at age 52. Although Jimmy Carter has been out of office for almost four decades now, he is still making his presence known on political and global stages.

Tiwa Savage To Face Beyonce, Others As ...

Nigerian Bukayo Saka Called Up to the ...