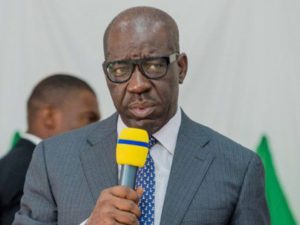 The Edo State governor, Godwin Obaseki has disclosed that he doesn’t have any plan to return to his former party, the All Progressives Congress (APC).

After he was re-elected, he visited the President at the presidential villa and many people thought he might be contemplating of returning to his former party.

”Gleaning from the comments of Mr President, he said that he wants to leave a democracy that is built on integrity, accountability and hard work. Those were his words and I subscribe totally to that. It will not show integrity; it will not demonstrate somebody that has ethical or moral foundation to do what you asked about. I couldn’t have contested in one party, won on that party and then consider moving to another party. It is not the kind of thing to do, it’s not the right thing to do and I am sure you will not encourage me to do that.

So, this morning we are here in the villa to show our profound gratitude and appreciation for this, which on the surface will look normal but the implications are very far reaching. Because, this is a sitting president whose party’s was contesting an election and insisted that the right thing be done and a level playing field be created for contestants. By doing so, that singular action has deepened our democracy, far beyond what we can understand and imagine today.

So, for that act alone, we felt we must come and say thank you. Mr President in his characteristic humorous manner, said he reluctantly congratulated me for beating his party. He also pointed that his role first we foremost as president of Nigeria, is to be president of all regardless of your party, race, tribe, creed. We couldn’t ask for more from Mr President, he really played the role of a statesman.”