Oba of Benin Congratulates Obaseki On His Re-election 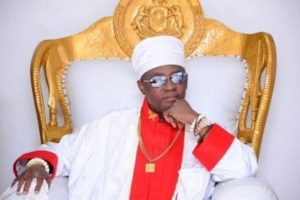 Praising the other 14 gubernatorial candidates and their teeming supporters for adhering to his advice on violence-free election in Edo, he said in a statement signed by Frank Irabor, Secretary of the Benin Traditional Council, thus: “On behalf of the Oba of Benin, the Benin Traditional Council wishes to congratulate Governor Obaseki on his re-election for a second term.

“As His Royal Majesty (Oba of Benin) said on numerous occasions, the Benin throne is non-partisan. On Election Day, the people spoke, because the voice of the people is the voice of God. The Oba of Benin thanks all the candidates for adhering to the advice for a violent-free election given to them during the peace meeting in the Oba’s palace before the election, which has been widely-acclaimed to have doused the tension that was building up before the poll.”

The Oba of Benin also praised President Muhammadu Buhari for ensuring a violence-free and fair election. In addition, he commended the Independent National Electoral Commission (INEC) headed by Prof. Mahmood Yakubu, for the peaceful and successful election, and also praised the security agencies for a job well done.