Lionel Messi Confirms He Is Staying At Barcelona

Lionel Messi has confirmed that he will be staying at the Barcelona Football Club for the next season. 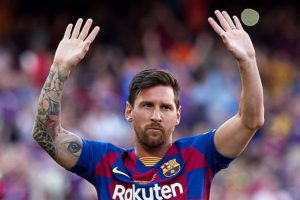 Explaining the reason why he is leaving, Lionel Messi said, “I thought and we were sure that I’d be a free agent. The president always told me that I could decide to stay or go at the end of the season and they’re now clinging to the fact that I hadn’t said anything by June 10, when it turns out that on June 10 the La Liga season was still ongoing and we were in the midst of this virus and this illness that altered the whole fixture calendar. And that’s the reason why I’m staying on at the club. I’m now staying because the president told me that the only way I could leave was by paying the €700m release clause, which is impossible.”