Flying cars would soon be a reality as SkyDrive, a Japanese company has successfully tested its manned flying car with one person onboard. In a video released by the Japanese company, the flying car was lifted several feet off the ground, and hovered in a “netted area” for four minutes. 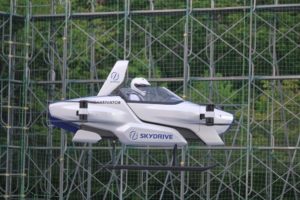 Tomohiro Fukuzawa, the head of the Japan’s SkyDrive Company said that he hopes the flying car would be available for purchase and use by 2023, as critical steps would have been taken in developing the cars for adequate safety.

Speaking on the distance the car would be able to fly, Tomohiro said that the car can fly for only 5-10 minutes, and if it would fly for 30 minutes, then, it has to be built with more potential. Tomohiro also highlighted the advantages of the flying car (electric vertical takeoff and landing) vehicles to include, quick point-to-point personal travel and being able to escape unnecessary traffic jams. He also said that the flying cars fly automatically, and do not need a pilot.

The earliest you'll get to try this manned flying car is 2023 pic.twitter.com/hieYYQNtjI