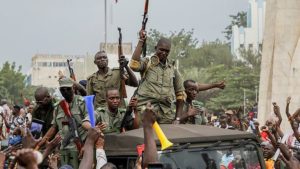 France on Sunday called on Mali’s military junta to “quickly” organise a transition to civilian rule after this month’s coup, warning that the political crisis would benefit terrorists.

The August 18 coup has shocked ally France, which fears instability in Mali could undermine its military campaigns against Islamist militants in West Africa’s Sahel region.

“This transition must be done quickly… It is a matter of months,” Armed Forces Minister Florence Parly told French media.

“If this is not done, then the risk is that it will first benefit the terrorists, because terrorists feed on the weakness of states and the Malian state is weak, very weak at the moment,” she added.

“Moreover, the international community, which has committed itself to the Sahel, and Mali in particular, could ask itself questions,” she also warned.

Swathes of Mali’s territory are outside of the control of central authorities and years of fighting have failed to halt an Islamist insurgency that has claimed thousands of lives since emerging in 2012.

France has more than 5,000 soldiers as part of Operation Barkhane, its anti-jihadist force in the Sahel.

The UN has deployed 13,000 soldiers to Mali in one of its biggest peacekeeping operations, while a European special forces group dubbed Takuba and the so-called G5 Sahel, an under-resourced force of regional soldiers, are also present.

Neighbouring West African countries, which are demanding a return to civil rule and elections within 12 months, decided Friday to maintain the closure of borders and a ban on trade and financial flows with Mali.