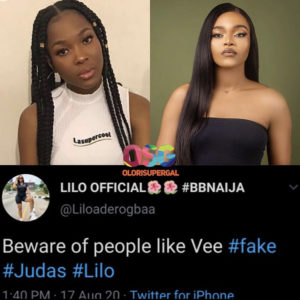 Former big brother Naija star, Lilo has dragged Vee on Twitter by saying she is a FAKE person.

There was a brewing sweet friendship between the two ladies during her stay in the house because they both had boyfriends who were best friends and had good vibes for each other.

Unfortunately, Vee is one of the people who voted her out of the house with the reason being that she sees Lilo’s focus outside the BBNaija house.

Reacting to Vee’s comment, Lilo made a tweet asking people to be careful when dealing with people like Vee. She added hashtags describing her as ‘FAKE’ and ‘JUDAS’.