The Nigerian Railway Corporation has announced that its railway operations on the Lagos-Ibadan Standard Guage Rail line will commence from the middle of September with 16 trips daily. This was disclosed by the Managing Director of NRC, Fidet Okhiria, on Saturday in Ibadan during an inspection tour of the project by the Ministers of Transportation, Rotimi Amaechi, and Information and Culture, Lai Mohammed. 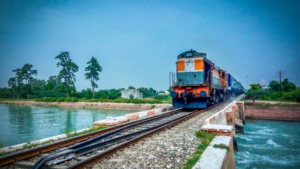 He said, “We will start by the middle of September from Yaba to Ibadan while the other construction finishing will continue. We already have 24 coaches and a set of DMUs (Diesel Multiple Units) made of eight coaches. With that, we intend to have 16 trips a day.”