Lebanon’s cabinet has resigned over the blast that rocked Beirut which has led to violent protests in the state.

The resignation of the Lebanon’s government was announced by the Prime Minister, Hassan Diab while he was addressing the nation. The Lebanon’s Prime Minister said the reason for the blast was a case of endemic corruption and also stated, “we are with the people in calling for trying those responsible for this crime.” 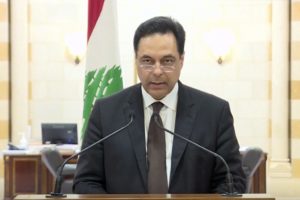 The Beirut explosion, which occured less than a week ago, killed over 160 people and injured around 6,000 people. The blast also destroyed the city, reducing buildings to rubble and leaving hundreds of thousands homeless.

The president had earlier said that the massive blast was as a result of the detonation of 2,750 tonnes of ammonium nitrate stored unsafely at the port for years. This led to an angry protest on the streets of Lebanon, asking for a political change.

According to Lebanon’s state security, about 20 people have been detained over the blast, including the head of Lebanon’s customs department and his predecessor, as well as the head of the port.