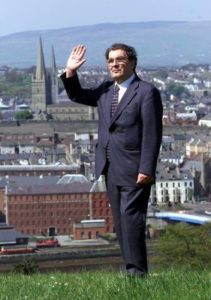 A Roman Catholic politician who was awarded the Nobel Peace Prize for ending a 25 years sectarian conflict and bloodshed in Northern Ireland, John Hume has died. He was 83 years old.

According to a short statement released by his family, the peace hero died after a brief illness. The statement further reads, “It seems particularly apt for these strange and fearful days to remember the phrase that gave hope to John and so many of us through dark times: We shall overcome.”

John Hume was known for his campaign of peace during the Northern Ireland strife which lasted for 25 years. He used the tools of diplomacy and public exhortation to speak against the violence of the Irish Republican Army which afforded Northen Ireland the opportunity to rest from a conflict that claimed more than 3,000 lives.

Because of peace advocates like John Hume, a long-term war against oppression and violence has come to an end and Northern Ireland now live in peace and freedom. May his soul rest in perfect peace.