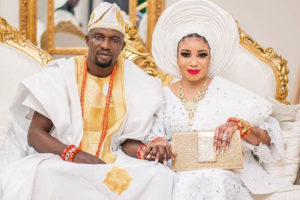 The Alaafin of Oyo, Oba Lamidi Adeyemi paid the newly-wed actress, Lizzy Anjorin and her husband a visit on Sunday at their home in Lagos.

The visit, which was posted by Lizzy Anjorin on her Instagram page, was a surprise to the actress, as she mentioned in the caption. According to her, she was still in her honeymoon moments with her husband when she received a call from Olori Memunat that “her father” (Oba Lamidi Adeyemi) was on his way to see her and would not leave Lagos until he sees her and her husband.

The Alaafin of Oyo was seen talking with the actress and her husband in the video posted on Lizzy Anjorin’s Instagram page. However, Lizzy has hinted that the Alaafin told her husband, Mr Lawal to pay another bride price to him with a private jet; a request which has made her husband start trembling.

The actress also thanked the Alaafin of Oyo for being her strong spinal cord. See her post below: