Meet Prince Julius Adelusi-Adeluyi, the Doyen of CSR in Nigeria

In a world where ‘success’ involves ‘hustling hard’ and broadcasting every philanthropic gesture in order to earn ‘bragging rights’, it is refreshing to observe individuals who do not care for the norm but  ‘hustle’ to provide solutions to societal challenges.

A quick Google search on the name Julius -Adelusi-Adeluyi pulls up a number of amazing results but none would be as impressive as this newspaper clipping that dates back to 1967. 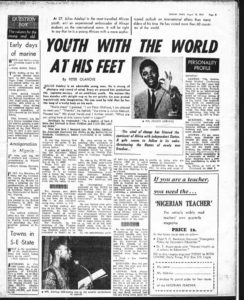 If there’s anything to note about the year 1967, it was the beginning of the Nigerian Civil War. During that time, Prince Julius Adelusi-Adeluyi, OFR, mni, had just been unanimously elected as the Associate Secretary for Africa in the International Students Conference (ISC) in Leiden, Holland. He was also the first Nigerian to be elected. On assuming the role, one of his first tasks was to lead a 17-nation delegation team to the war front during the Nigerian Civil War for advocacy and a peaceful resolution. We wonder if Nigeria still has such youths who are willing to trail this great man’s footsteps, in the process, build a legacy for themselves.

Although he studied pharmacy at the University of Ife (now Obafemi Awolowo University), he also graduated from the Nigerian Law School five years after. Since he embraced law practice, he has taken up several pro bono cases to support prisoners and the underprivileged in the society.

He joined the Rotary Club of Ikeja in 1969 where he served as the president of the club in 1977/78. He also became the first district governor of Rotary District 911 (Nigeria) where he laid a solid foundation for the growth of Rotary in the country. It comes as no surprise that he is the current Chairman of MTN Foundation, which has invested over 21 billion Naira since inception in 36 states of the federation and FCT, brightening lives through over 900 impactful projects that cut across health, education, economic empowerment and national priority.

Through the MTN Foundation, he has championed causes including donations to orphanages and correctional facilities, lent his voice to the fight against substance abuse, powered education through the donation of e-libraries, and provision of healthcare facilities to improve maternal health .

In celebration of a life committed to improving lives, the MTN Foundation, in commemoration of the erudite Chairman’s birthday has revamped a library in his alma mater – the Obafemi Awolowo University – and converted it to an e-library. The virtual handover ceremony took place on Thursday, July 30, 2020.