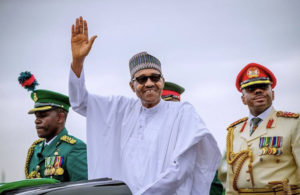 The Deputy Ambassador of Nigeria to Italy, Franklin Ogunyemi, has disclosed that the Buhari administration is glad about Victor Osimhen’s impending move to Napoli as he is representing the nation on the international world in football.

Mr. Franklin Ogunyemi revealed that President Buhari and the entire nation have thrown their weight behind Victor Osimhen to go higher and achieve more laurels for the nation as he has agreed a five-year deal and chosen to wear the number 9 jersey.

Ogunyemi  granted an interview with a Naples based radio station known as Radio Kiss Kiss as he expressed the abilities of the striker to Ronaldo.

He said “We know that the head of state of our country, Muhammadu Buhari, is also happy with this transfer. Osimhen is a young but already very strong footballer. He will perhaps be the highest-paid African footballer, a sign that we are talking about a very talented boy.

“He is strong, fast, tactical. He has a characteristic of the Nigerian population: he never gives up. For these reasons, I compare him to Ronaldo.”