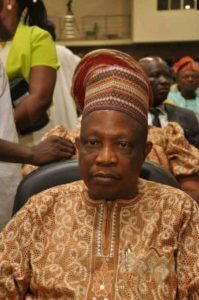 The Ondo State’s Commissioner for Health, Dr. Wahab Adegbenro is dead. This was announced in a press statement of the State Government which was signed by the Commissioner for Information and Orientation, Donald Ojogo.

The press statement partly read, “This is one death too heavy to bear. The excruciating pains the timing has unsparingly, wrought on us in Ondo State are no less potent. To say the least, Dr Adegbenro was our General and died healing others. Having served humanity with the attendant kindness, he played his part honourably.”

The Ondo State Government has decided to honour the Commissioner by declaring tomorrow a work-free day and also said that all flags in the state must fly at half-mast for 7 days starting from today, July 2, 2020.

Until his death, the Ondo State Conmissioner for Health, Dr. Adegbenro doubled as the Chairman of the Ondo State Inter-ministerial Committee Against Covid-19. Even though there are no confirmed reports as to the cause of the Commissioner’s death, it is highly suspected that he died of Coronavirus. May his soul rest in peace.