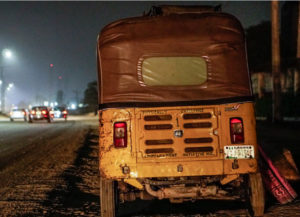 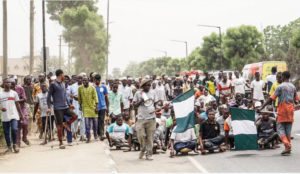 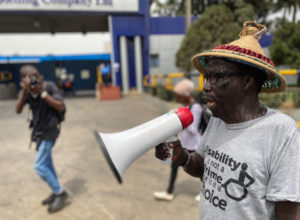 On 25 February 2020, over 600 persons living with disabilities (PLWDs) and other ordinary Lagosians went on a peaceful protest to the Lagos State Governor’s office to request for an audience regarding their plight in the aftermath of the blanket ban on keke across Lagos that started on 1 February 2020.  The peaceful protest following an earlier peaceful protest staged on 7 February 2020 whereby PCEI members whose livelihoods and mobility had been decimated by the overnight keke ban delivered a petition to the Lagos State Governor and the House of Assembly regarding their plight. Despite promises by the representatives that day, up to date there has been no response to their appeals.

During the day of 25 February 2020, hundreds of protesters once again peacefully appealed for the Governor to grant them audience to discuss on alternatives to the outright ban of keke, which could help PLWDs affected to once again earn a living and move around the city. As evening fell without any response, the peaceful protesters settled in to spend the night outside the Governor’s office.

Just before midnight, officers of the Nigerian Police Force on ground began to shoot tear gas into the midst of the protesters who were eating or starting to sleep. Rather than scatter, the protesters took courage to stay together and united. Sometime later, more tear gas was fired and at least five of the group’s leaders were arrested and detained at the Lagos State Task Force cell. Despite efforts to secure their release, the five leaders have since been charged before the Lagos State Mobile Court on bogus charges like “wandering” and efforts to perfect their bail are ongoing.

The background for the peaceful protest up until these attacks and arrests is the sudden blanket ban on keke and okada across Lagos State starting 1 February 2020, which began with ruthless and illegal enforcement activities, including the seizure of vehicles that were not even moving on the streets. This ban left ordinary Lagosians stranded en masse at bus stops across the State and decimated the livelihoods and investments of those involved in lawful and useful transportation businesses.

Some of the worst impacts of this policy have been on persons living with disabilities across Lagos State, many of whom have over recent years been supported by PCEI to leave street begging for more dignified and lawful work of driving kekes. Our members have invested heavily to learn how to drive, get the requisite licenses, and purchase kekes that they have proudly driven until 31 January 2020, providing for themselves and their families. The ban has witnessed several of their kekes seized on 1 February 2020 from within a taxi park where they were parked respecting the ban; up to date, their petitions to the Lagos State Task Force and Commissioner of Police have received no response.

Beyond these violations of our members’ rights to livelihood and to property, the chaos in the now even more inadequate transportation system has left ordinary citizens stranded at bus stops across the State. For PCEI members, the impacts have been worse since many of them struggle already to navigate Lagos traffic; now they are practically trampled in the rush for buses and have been unable to either move themselves using their network’s keke fleet or move long distances self-propelled. This amounts to a severe assault on their right to mobility and, moreso, their right to dignity.

The peaceful protest organized on 25 February 2020 is a sincere attempt to engage the Governor’s office regarding the negative impacts of the ban and the alternative approaches the Government could pursue to improve security in the transport sector without such “collateral damage,” aligned with the efforts of a broader coalition of civil society and concerned citizens who have championed a #RegulateNotBan approach that has called for an alternative policy by the end of February 2020.

Still in shock, we condemn in no uncertain terms the attacks on peaceful protesters and the arrest and frivolous prosecution of leaders of the PLWD community in Lagos, who are meant to enjoy the highest forms of protection in line with the Lagos State Special Peoples’ Law, 2011. By contrast, they have now suffered violations of their rights to freedom of assembly, to freedom of expression, to physical integrity, and to liberty, on top of the other rights already violated by the blanket keke ban.

We call for the immediate release of Mohammed Zanna, Sarkin Abubakar Umaru, Shehu Issa Daiyanu, Guragu Mustapha Bello, and Guragu Yunusa Mohammed, for the frivolous charges against them to be dropped, and for the Governor to respond to the petitions and requests made by these peaceful and lawful protesters, including reversal of the keke ban in favor of pro-people regulation.