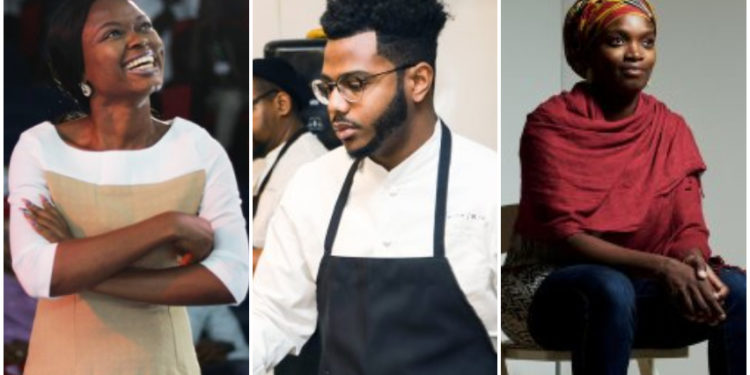 Three Nigerians have been listed on TIME’s 2019 list of 100 rising stars that are shaping the future of business, entertainment, sports, politics, science, health and more.

Oluwaseun Ayodeji Osowobi, Njideka Akunyili-Crosby and Kwame Onwuachi made the list and they were described as people who “have grand ambitions, and they know they may face even greater setbacks … they are driven by hope. They are eager to defy the odds—and fight for a better future.”

Read more about the Nigerians listed below:

Dismayed by the lack of resources available for sexual-assault survivors in Nigeria, Oluwaseun Ayodeji Osowobi decided to start an organization dedicated to the issue despite her fears. “Telling my story as a survivor, that comes with a lot of stigma,” Osowobi tells TIME. Five years on, her organization Stand to End Rape (STER) has reached around 200,000 people across the country through its services, such as training for health workers and counseling for survivors. Osowobi, who has been honored as an Obama Foundation emerging leader, has big plans for 2020, including lobbying the Nigerian government for a stronger bill addressing harassment at universities.

Njideka Akunyili Crosby’s works have sold for millions at auctions. But in 2018, it was possible to see one at Los Angeles’ Museum of Contemporary Art free of charge. The visual artist was only the second person to be chosen to create a mural on the walls of the museum itself, which was visible from Grand Avenue’s sidewalk. It featured brightly colored scenes of domestic life: in one section, a woman rests her elbow on a table, seemingly deep in thought. Akunyili Crosby, who moved to the U.S. from Nigeria in her teens, is known for such scenes, some of which are autobiographical and incorporate references to both countries. “I’m really looking at how [Nigeria and the U.S.] are complex hybrid spaces,” she tells TIME.

Every chef is taught how to manage a team and learns technique, like how to break down a dish and put it into production. These are the bare bones of being a good chef.

But having a point of view that is different from everyone else’s and taking that point of view and unapologetically making it an integral piece of your restaurant and your food—to me, that’s what sets chefs apart. And Kwame Onwuachi has done that. He learned to be truthful with his food at a very young age, at a pivotal point in his career. That’s what sets him and his Washington, D.C., restaurant, Kith and Kin, apart: his decision to say, This is the food I should do. This is the message I want to put out there in the world.

When a chef does that, it’s not pretty food on a plate anymore. It’s about telling a bigger story. The restaurant world is changing, and it’s becoming more inclusive. We’re starting to hear from different voices, and because of his honesty and his willingness to hold up a mirror to our industry, Kwame is one of the leading figures in that movement.

NIGERIAN MAN PROPOSES TO HIS WIFE AFTER ...