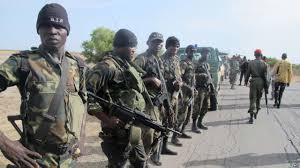 The Nigerian Army and its Cameroonian counterpart on Friday agreed to work closely to fight Boko Haram insurgents in their borders.

Brig. Gen. Texas Chukwu, the Director, Army Public Relations, said in a statement in Maiduguri that the two armies had agreed to collaborate and sustain joint military operations to end the insurgency in their borders.

He explained that the visit was a routine exercise to the division’s units sharing common flank with the CDF Battalion.

Chukwu quoted Biu as reminding the troops to be decisive and not to relent in denying Boko Haram insurgents freedom of action, as the dry season approaches.

“Biu enjoined the CDF troops to collaborate and work assiduously with their Nigerian counterparts, engage and neutralize Boko Haram terrorists and other criminal activities, to protect lives and property as well as to restore peace in their common borders,” Chukwu said in the statement.

Chukwu said that the commander lauded the CDF on their professionalism and valour demonstrated in joint operations conducted with their Nigerian counterpart to defeat the insurgents.

He further quoted Biu as extending the appreciation of the Chief of Army Staff, Lt. Gen. Tukur Buratai, to the CDF, over the existing cordial relationships between them.

Also, the statement quoted Robert Bokwe, the Commander of the CDF Battalion, as commending Biu over the visit.

He reiterated the commitment of the CDF to support the Nigerian Army in the counter insurgency campaign.