Fayose To Be Arraigned Today For Alleged N1.2b Fraud 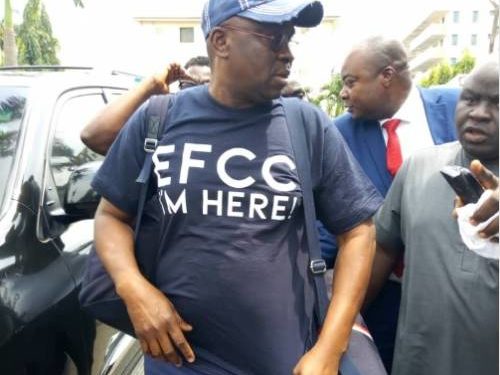 The immediate past Governor of Ekiti State, Ayodele Fayose, will today be arraigned before a federal court sitting in Lagos over possession of N1.3b through illegal means.

He is facing 11 counts, which according to the Economic and Financial Crimes Commission is contrary to Section 15 (2) (d), 18 (c) of the Money Laundering (Prohibition) Act 2011 (as amended) and punishable under Section 15 (3) and (4) of the same law.

The anti-graft agency claimed that the Fayose unlawfully spent N1,151, 711, 573 on chalets 3, 4, 6 and 9 at plot of land at Tiamiyu Savage street, Victoria Island, Lagos in the name of JJ Technical Service.

The commission also states that the ex-governor also took possession of N1 billion for his gubernatorial ambition and also another $5 million from former Minister of State for Defence, Musiliu Obanikoro, which is a breach of election laws.

The EFCC charges reads:  “That you Mr. Ayodele Fayose between November 12, 2014 and August 20, 2015 within the jurisdiction of this honourable court, did use an aggregate sum of N1, 151, 711, 573 (one billion, one hundred and fifty one million, seven hundred and eleven thousand, five hundred and seventy three naira) to acquire chalets 3, 4, 6 and 9 of the property situated at plot 100 Tiamiyu Savage Street, Victoria Island, Lagos in the name of JJ Technical Service, which sum you reasonably ought to have known formed part of the proceeds of an unlawful act, to wit: criminal breach of trust/stealing and you thereby committed an offence contrary to Section 15 (2) (d) of the Money Laundering (Prohibition) Act 2011 (as amended) and punishable under Section 15 (3) of the same Act.”