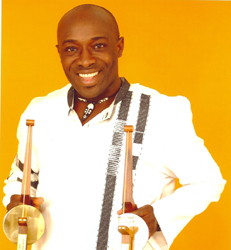 Popular Nigerian Musician, Adewale Ayuba, has received the 2018 Afroglobal Television excellence award in entertainment along with 17 other recipients from across the world.
Adewale Ayuba is the lead-singer of his band ‘Ayuba and The Bonsue Fuji Band’. His signature sound in his music is the Yoruba talking drum and sometimes the American percussion.
The award was presented at the Royalton Banquet Center, Ontario, Canada on Saturday. Ayuba who expressed excitement while speaking on Sunday said that the award would give room for more recognition of Fuji music globally. In his words:

“I thank God for all His support, I am very honoured receiving the award of excellence, I see it as a door opener for Fuji music. I dedicate the award to all Fuji artists all over the world.
” Now we will see more acceptance of Fuji music among the international community and am planning to have some musical collaborations with some African musicians, this award will make it easier now”.

Ayuba said the award is the 13th international recognition he had received, apart from 48 local ones.
Other recipients include, Portia Simpson-Miller, first female Prime Minister of Jamaica who received the Justice Irving Andre-Marcus Garvey lifetime achievement award.