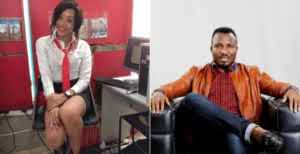 Last week the internet spread the news of media practitioner Theo Ukpaa having raped a 16-year old Emilia Samuel.
Emilia, who is now married with two children, alleged that Ukpaa raped and deflowered her at the age of 16-year-old and continued until he left the country.

This led to Ukpaa’s boss Linda Ikeji to sack him while on his honeymoon which he still is on.

Reacting to the news, Ukpaa told Sunday Scoop ;“I am aware of the rape allegation. I am on my honeymoon right now; I will be back to the country next week. My legal team is on the matter. When I come into town, we can have a chat.”

On Linda Ikeji sacking him Ukpaa confirmed his appointment was terminated on Monday, August 27, after reading Samuel’s story and insisted he would react to his sack after his honeymoon.

Omotola Jalade is a horrible person — ...