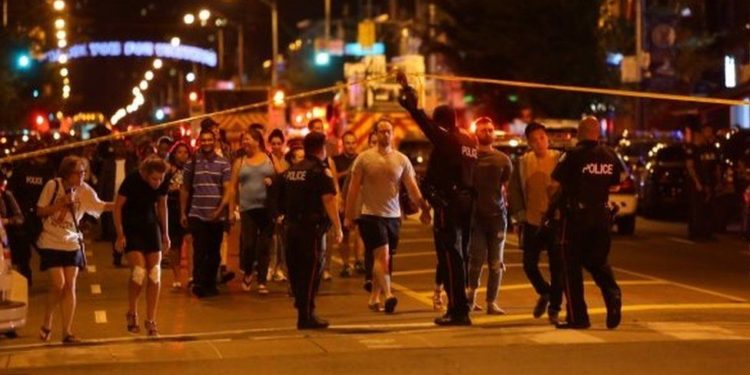 Police officials have confirmed the death of a young woman and 13 injured persons after a gunman opened fire on a busy avenue in Toronto. One of the victims who is critically injured is a girl of eight or nine years-old.

Toronto police confirmed the gunman had been killed but gave no other details. It is unclear whether he was shot by police or killed himself.

According to reports from Canada’s Globe and Mail newspaper, the attack erupted on Danforth Avenue on Sunday evening, when the area was teeming with people. The site of the attack is a piazza with a fountain that is popular with local people and was busy at the time, the Globe and Mail writes.

Emergency services were called out just after 22:00 (02:00 GMT Monday) after a number of people were reportedly hurt in a cafe called the Demetres, while others were hit in the street. The motive for the shooting, which reportedly targeted at least two cafes or restaurants, is still unclear.

In a video clip shared by Canadian media, a white man wearing a dark cap, dark clothing and carrying a shoulder bag can be seen stopping on a pavement and pulling out a handgun before firing shots.

Witness Andrew Mantzios was at the scene drinking coffee with friends by the fountain when he heard shots and turned around to see the gunman coming towards his group.
“He had this horrible expression on his face,” Mr Mantzios was quoted as saying by the paper.
The gunman fired at a crowd of people waiting to cross the street, he said.
“And then a lady tried to run and she fell down. He turned around and shot her point blank, two or three times.”
Mr Mantzios and his friends dropped to the ground for cover and watched as the attacker criss-crossed the avenue, shooting into businesses.

Other eyewitnesses said they heard volleys of shots, with pauses in between.
“It would shoot, there’d be a pause, we heard more shooting, and then a pause and then more shooting,” John Tulloch, who was walking on the avenue with his brother at the time, told the paper.
“There must’ve been 20, 30 shots, altogether. It was a lot. We just ran. People weren’t yelling but I think everyone was concerned,” he added.
“It just seemed very surreal, almost like it wasn’t really happening. But everyone was sort of moving and going away. It was hard to believe it was real.”

Some of the victims were immediately treated at the scene of the shooting while others were taken to local hospitals.

The act has been condemned by Toronto Mayor, John Tory who described the act “despicable” attack on “people innocently enjoying a Sunday evening”. The Mayor appealed to people not to draw any conclusions before there was further information from the police.

Gun violence is much rarer in Canada than over the border in the US, but Toronto has seen attacks increase dramatically in recent years.

Shootings in the city over a holiday weekend earlier this month led to Mayor Tory saying he was working to get more police patrolling the streets.