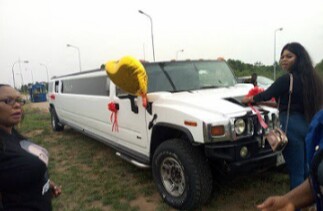 Big Brother Naija 2018 housemates BamBam and Teddy A who recently got evicted from the ongoing reality TV show, were welcomed by their fans at the airport in grand style.

BamBam was on Saturday, March 31, evicted from the house while Teddy A left the reality show on Sunday, April 1. The BBNaija lovebirds arrived Nigerian on Monday, April 2.

Waiting for them at the airport were their fans. They came prepared to welcome the couple as they were seen singing and dancing outside the airport.

The fans came with a white Hummer Stretch to pick them up from the airport. The picture was shared on Instagram with the caption:

“It’s going to be a grand welcome for Teddy A and Bambam in a couple of minutes. They’ll be welcomed like royalty. Their fans are really simply the most amazing I’ve seen ever. Bamteddy couldn’t have had it any other way. If you’re not at the airport, you know you’re going to miss out.”

On Monday, April 2, one time evicted housemate and BBNaija 2018 returnee Khloe emerged as the new head of house. Following her victory was the nomination of housemates who would be up for possible eviction.

NWANKWO KANU INTENDS TO RUN FOR ...