Lai Mohammed, leave me out of your tales by moonlight on IPOB – Jonathan 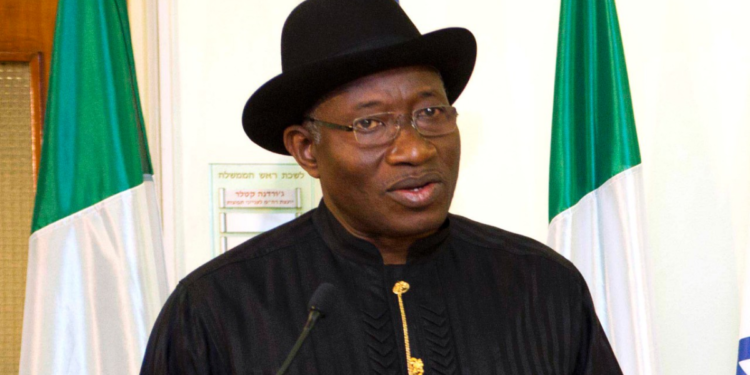 Former President Goodluck Ebele Jonathan has called on the Minister of Information and Culture Lai Mohammed to quit blaming him for all of the inadequacies of the Buhari-administration.

He said this in a statement shared on his official Facebook page.

Jonathan, in the post shared by his aide Reno Omokri, has said that the current administration is peddling propaganda.

He asked that if the sponsors of the Indigenous People of Biafra (IPOB) are known, then they should be identified, arrested, and prosecuted.

The former president also advised the current administration to tread with caution on the issue of deploying the military to the south.

Nigerian is not under military rule, the statement said, and the military should be fighting a nation’s external enemies, not taking up the police’s responsibility of fighting criminality within the nation.

Lai Mohammed, Leave Former President Jonathan Out of Your Tales by Moonlight on IPOB

The insinuations in the press conference given by Minister of Information, Alhaji Lai Mohammed, on Sunday the 17th of September 2017, accusing the opposition of sponsoring the Indigenous People of Biafra, IPOB, and the fact that he mentioned that Nnamdi Kanu preached Nigerian unity during the administration of former President Goodluck Jonathan is another clear indication that the present administration has not left propaganda mode for proper agenda mode two and a half year into their tenure.

If the government in which Lai Mohammed serves, knows which opposition members are sponsoring IPOB, then they should identify them, arrest them and then prosecute them.

Ever since Lai Mohammed made his ill advised statement, a principal member of the All Progressive Congress government and the Senate President, Senator Bukola Saraki, has come out to say that the actions in the Southeast are troubling and some of it are unconstitutional. Is he also sponsoring IPOB too?

Perhaps Lai Mohammed thinks everybody is like him and those he represents.

I also commend the governors of the Southeast for cooperating with the military and in the process saving lives and property. It is a noble act that should not be ignored.

However, we want to advise the Buhari administration, which has announced plans to extend the military show of force to the Southsouth and the Southwest through Operation Crocodile Smile, to tread with caution.

Nigeria is no longer under military rule. In a democracy, you separate the military from the police. The military is not meant to fight criminality within a nation because they are trained to fight a nation’s external enemies.

It is the police that are trained to fight crime Internally.

When the military starts doing the job of the police and starts fighting or doing what they call a ‘show of force’, the effect will not be to reduce crime. The effect will be to intimidate people.

Let me say again to Lai Mohammed, the time for propaganda is gone. The time for blaming Dr. Goodluck Jonathan for all the unfulfilled promises of the APC government is over. Nigerians are no longer buying it.

Rome may not have been built in a day, but from day one you could see evidence of builders building up Rome. But what have we seen in the last two and a half years of the Muhammadu Buhari administration? We see a government that from day one has been blaming instead of building.

Finally, I seize this opportunity to remind Lai Mohammed that under the Jonathan administration the ministry of information had annual ministerial briefing where the media and civil society groups interrogated cabinet ministers on the activities of their departments. 100 days briefing was given to Nigerians on the government’s vision and one year briefings was given to the nation on government activities. An elaborate mid term briefing was also given by that government to the country on the achievements of the administration.

Diamond Platnumz confirms having a child with ...