Over 1,000 perished in the Sierra Leone mudslide, Local Leaders Say 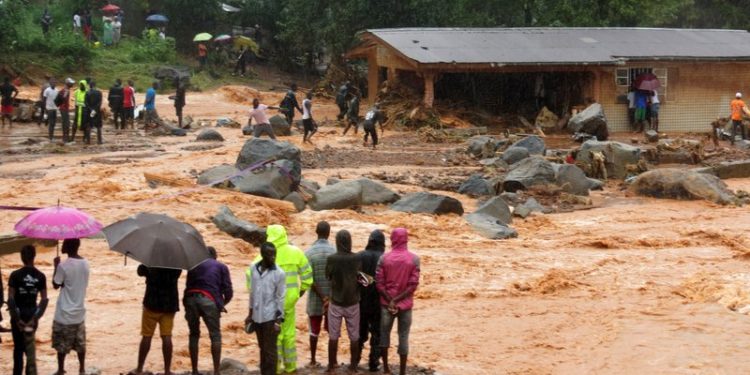 Over 1,000 people are said to have been killed by the Sierra Leone flood and mudslide that took place in Freetown about two weeks ago.

As at the last official statement, over 450 were reported dead, the number expected to rise with over 600 still missing.

But residents of the Regent area of Freetown, where rescue efforts are still being carried out, say over a thousand lives have been lost, Al Jazeera reports.

Elenoroh Jokomie Metzger, the head of the women of Regent, said on Sunday during services honoring the disaster’s victims said: “Over 1,000 perished in the mudslide and flood disaster, and we will never know the exact number now.”

Reverend Bishop Emeritus Arnold Temple, who delivered the Sunday sermon at a Methodist church near Regent corroborated the count, saying:

It may well be over 1,000 Sierra Leoneans we are mourning now. But why should about 1,000 of our compatriots’ lives end tragically like this?

Who should we really blame? We are bound at a point in the blame game to attribute the blame so that corrective measures can be put in place so that never again should we allow this to happen.

The first lady of Sierra Leone Sia Koroma also spoke during the ceremonies. She urged citizens to follow the government’s directives in solving the crisis, saying:

I stand here with a heavy heart. We have been through many calamities in our country.

We should all do self-examination and learn to be obedient to man-made laws, especially when the government plans to take action for the development of the country.

Over 3000 people are said to have been rendered homeless in the disaster, with relief efforts still ongoing.