A court order has stopped the premiere of the movie “Okafor’s Law“.  The movie produced by Omoni Oboli was supposed to premiere at IMAX Cinema yesterday. Following the injunction which came at about 5pm yesterday, the scheduled screening of “Okafor’s Law” didn’t hold. 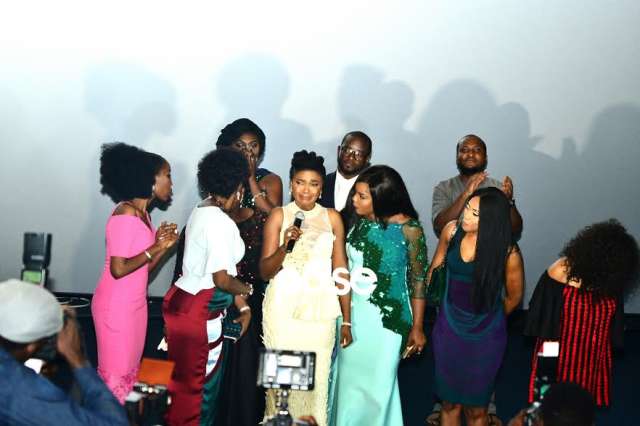 An emotional Omoni broke down in tears while addressing guests who turned up for the event.

“I’m so honoured that you’re all here today, thank you so much. Thank you for honouring me, thank you for your support over the years, thank you for always being there when I call. It means so much to me, and I don’t take it for granted. ”

“Unfortunately, we can’t show the film. At 5pm, we got an injunction from the court not to show this film. I’m sure some of you heard some allegation sometime ago, but, my story, my script, my movie, was written 100% by me. You can take that to the bank.”

What anybody says, what anybody does, it’s all a lie. I don’t know why this is happening, I work hard. ”

“It’s a shame that anybody would want to stop this. I mean, it has been a long process, we shot this movie last year, we have gone everywhere, we have put in so much money, publicity and everything, and some people are trying to stop it. ”

“God is on the throne and it’s fine. It will all come out in the wash. This is not going to stop me, I’m going to keep pushing. ”

“I could have gone ahead to show this film today, but, I’m a law abiding citizen and I have to follow the law, unfortunately.

A canada-based producer, Jude Idada, who had accused Omoni of  Copyright Infringement, took the case to court in 2016