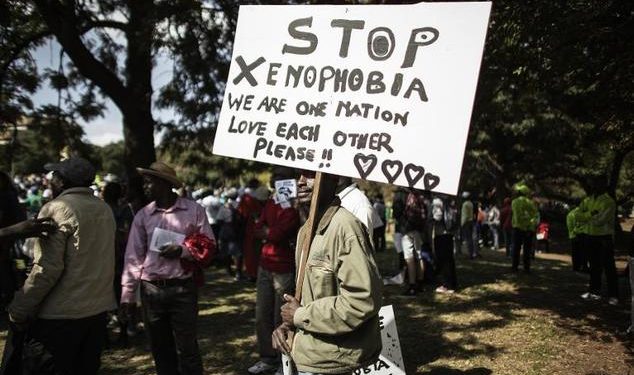 House of Reps Committee on Diaspora’s Chairperson, Mrs Rita Orji has today revealed there’s a clear gang up against Nigerians in South Africa

According to reports, Orji said this after receiving the news of fresh attacks on Nigerians while she also urged Nigerians in South Africa to quickly relocate to Nigeria.

She said, “If they must continue killing us despite our efforts to make peace then they should just come back home for good.

“It is not to go and massage the ego of South Africans or their envoy, the truth of the matter is that there is a gang up against Nigerians in South Africa, I made it clear that the manner the reoccurrence of xenophobic attack is coming in 2015, 2016 and 2017, that time shall come when it will not take 6 months before it reoccurs because previous ones nobody has been sentenced to death, no remedy has been given to those that were attacked, those their businesses were looted were not compensated.

“People do not understand the story of what is happening in SA, it is a mere jealousy, the fact that the government is providing everything they needed and the fact that the people working hard to survive are still making it better than them.

“This is the clue and the problem because everything they want is being provided by the government, if you want to start business you are given money and if you are sick you are given money to go to hospital and treat your self, everything is on their doorstep, Nigerians are not beneficiaries of this yet they are hustling and working hard and they are living well because Nigerians are known to be hardworking men and women who do not rely on anybody than God.

“When I said enough is enough of this madness they said I was trying to incite violence but the truth is Nigeria is supposed to take a critical look, tell their embassy over here if they cannot control these people they call unknown soldiers that are killing human beings, let the diplomatic relationship be strengthened it is not an issue of talking because there are lot of issues Nigerians can do and they know they can.

“Going to massage their ego in the name of trying to make peace how long will that tarry. Today the delegates came back about two days ago and today five people are attacked does it show you there is remorse in any way that these people are interested in making peace, they are not, Nigerians should be weary because when you are there everything you are asking for is God protection.”

The House of Representatives had two weeks ago sent a delegation led by its leader, Honourable Femi Gbajabiamila to South Africa to mediate in the matter.