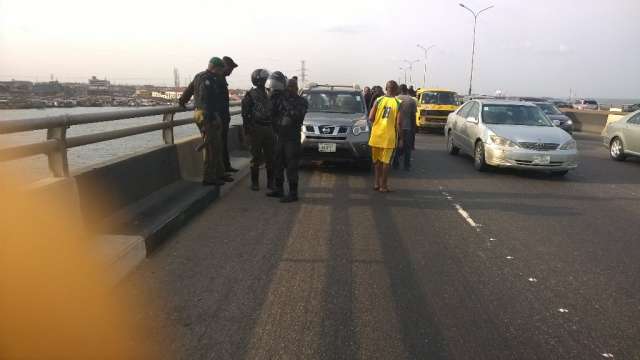 An unfounded details have emerged on the circumstances that might have led to the death of Dr Allwell Orji who jumped into a lagoon in Lagos on Sunday.

In a Facebook post, a medical doctor named Essien Attah noted that the unsatisfactory work conditions had driven many in the profession to a state of despondency.

Attah explained that the drop in job satisfaction, the retinue of dependents who seek doctors out for financial support, and the “recalcitrant nature of Government has left many doctors on half pay, irregular pay or no pay at all” could drive a doctor to end his life.

In the post titled ‘AND THE DOCTOR DIED’ Essien said “Don’t mind the facade of Dr Orji’s beautiful Nissan SUV, the man had issues and just a calming word could have averted this tragedy.

“Dr Orji Allwell was my junior and also a graduate of College of Medicine University of Lagos. Indeed I left the great citadel of learning just when he was learning the rudiments of the profession hence our paths never crossed but if they had, I would have embraced him like a brother and share ward round tales of how we survived the likes of Professor Bode and Professor Odum.

“But Dr Orji is dead. I heard he jumped off Third Mainland Bridge in an apparent suicide. What could have pushed the young man to take his own life? What level of frustration can kill the joy of life in an intelligent young man?

“Indeed the dark-side of Medicine in Nigeria has once again reared its ugly head. A profession that is in the final death throes of extinction has claimed another victim.

“Indeed many see Doctors as being on top of the food chain hence they carry a heavy burden. Numerous relatives feast on their finances like hungry vultures who keep on coming back for more carion. They can never take no for answer for it is said Doctors always have money as if they work in Nigerian Mint.

“Besides the retinue of dependents, there is the drop in job satisfaction. The recalcitrant nature of Government has left many doctors on half pay, irregular pay or no pay at all. How can a man with a retinue of dependents and a gamut of hungry mouths to feed survive when his small stipend is irregular and subject to political manipulations?

“And the frustration only mounts when you see your colleagues who travelled overseas faring far better despite your waning patriotic zeal that Nigeria will be better.

“This is only the beginning of frustration to harbour such justified thoughts.

“Then there is the poor state of affairs in the health sector. Incessant strikes and decaying infrastructure have reduced Doctors in Nigeria to a basal level of indignation and anger. It is now easier to squeeze water from stone than ensure the best possible care for patients. The most basic of life saving measures like Oxygen and Blood transfusion services are fast becoming a luxury and it is only a man of stone who will not feel depressed at the loss of a patient whose life could have been saved. Doctors see the poverty and the helplessness of the common man every day. And when you care for another human being, their problems become your problem as well hence you share in their laughter, sorrow or frustrations.

“This is the lot of a Nigerian Doctor.

“But the worst culprit of them all are fellow Doctors. How many colleagues called Dr Oji and asked how he was doing? How many went out of their way to show him love through his time of difficulty? A Doctor is not super human. He is flesh and blood. We all need each other.

“Instead professional rivalry amidst the spectre of consolidating respect and loyalty breeds a medical milieu that is akin to a rat race or the dog eat dog phenomenon in a bid to survive shark infested waters of economic recession and financial stability.

“The younger colleagues bemoan the vindictive tendencies of their seniors who train amidst abuse and subjugation. Meanwhile, the seniors are angered at the dwindling spectre of respect in the profession. Hence a tense atmosphere of unequally yoked colleagues is the bane of the medical profession in Nigeria that stokes the embers of sadness, hopelessness and depression.

“Dr Oji took it to the extreme but many more Doctors are ill motivated and dissatisfied with the system. Those who can, have left while others are in the process of leaving. These are indeed the lucky majority for Nigeria has twice the number of Nigerian Trained Doctors overseas than the number at home.

“And the trend is worsening as even more are jetting out as their future in Nigeria appears ever so bleak.

“It is time for Doctors to close ranks. Care for one another. Respect your seniors. And seniors stop belittling the younger colleagues. End the rivalry that sees parents eating their young and vice versa. It takes nothing to be kind to one another. Kindness and love are all Dr Oji needed but on his day of need we were all found wanting.

“Many a colleague are going through a lot but because of the burden of society, they feel ashamed to speak out. Hence the onus is on us Doctors to seek them out and nurture them back to sound mental and physical health. That’s what it means to be your brother’s keeper.

“Patients should also learn to appreciate their doctor. This is the sole joy of a Doctor that no one can take from them. Their service to humanity shouldn’t only be rewarded in heaven but a simple thank you can go a long way to making a doctor’s day. These are the worst of times to be sick in Nigeria and it’s also the worst of times for health personnel.
I know so many who are without a job and are struggling to survive. Even those with a job are living from hand to mouth.

“Don’t mind the facade of Dr Orji’s beautiful Nissan SUV, the man had issues and just a calming word could have averted this tragedy.

“Life is too short to spend it unhappy. Put a smile on someone’s face today. Dr Oji is no more and the Doctor Died, oh what a day of sorrow for many have tried but have failed to overcome the sorrow of today. Be an overcomer today. Make yourself happy but its even better when you make someone else happy. It is well….and the Doctor died, oh what a pity for a life lost prematurely to the sands of time.”