The Next Rated category has five young and promising acts that are expected to take over the music industry in the next few years to come. Pundits refer to this category as the most competitive and decisive one considering the fact that the winner will not only walk away with the plaque but also a brand new car.

The category is up for contest for Mavin Records duo of Reekado Banks and Korede Bello, G-Worldwide act, Kiss Daniel, YBNL’s Lil Kesh and the only female in contention, Cynthia Morgan.

The analysis: Reekado banks having won the Rookie competition of the award last year, the Mavin records star has been impressive with hits and large fan base arguably the most prolific out of the Mavin youthful trio of Di’Ja, Korede Bello and himself. His three singles in 2days is still fresh in the memory of music lovers across the federation. He truly deserves the nomination.

Korede Bello: Korede has an impressive year of music, although his latest ‘Somebody Great’ featuring Asa doesn’t fall into the year in review but ‘Godwin was widely accepted. Aside from his music, Korede also has a likeable character that made him fans favourite. But we feel he hasn’t done much to deserve a nomination in this category.

Kiss Daniel: ‘Woju’ hit single alone is enough to say Daniel should drive home the car but how about his follow up efforts? Considering the category has talented acts, it will be bias to judge based on that alone. Kiss is talented no doubt but it seems his management and he are trying to tread easy so as not to miss their step because he has not been putting out many contents and collabos unlike his contemporaries who has done well with their introductory tracks. We feel they are shocked by the fame that came with ‘Woju’. But he sure deserves his nomination.

Lil Kesh: The YBNL star is a strong favourite even Davido attested to that, a comment that made Cynthia Morgan respond. Even his label headliner, Olamide felt he was short-changed last year on the Rookie contest by dedicating his plaque to Kesh as his own Rookie of the year. Unlike Daniel, Lil Kesh has been impressive with hits upon hits and collabos, he was criticised by many as vulgar but we guess that is what streets want and is surely paying off for him.

Cynthia Morgan: This list would have been incomplete without Cynthia considering her dynamic style of music. She carved a niche for herself with her reggae dancehall style, German Juice was a hit her collabo and shows rate is also alarming. 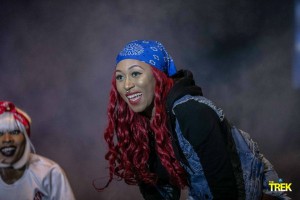 Our Verdict: The 5 were carefully selected and it is very close but we go for either Lil Kesh or Reekado Banks they have more fan base and their contribution to music in the course of the year was alarming.