‘Lee Rigby’s killer raped me when I was 14’: Young mother tells of sex-attack ordeal

A young mother has revealed that soldier killer Michael Adebolajo raped her when she was just 14 years old.

The victim, who is now in her 20s and living in London, said she passed out after Adebolajo drugged her with powerful cannabis, awaking from her stupor to find him on top of her.

‘I have looked in his eyes and seen the evil inside him,’ she told the Sunday Mirror. ‘I opened my eyes and his face was less than an inch from mine. I’ll never forget that moment as long as I live.

‘His teeth were discoloured and wonky. His eyes seemed to be burning. He smirked and his breath smelt foul and was hot on my face.’

Self-styled soldier of Islam Adebolajo was this week convicted alongside Michael Adebowale of the brutal murder of Fusilier Lee Rigby, who was hacked to death in the street close to Woolwich barracks.

Incredibly, just two days before the kiling in May, his rape victim bumped into him in a chance encounter and he tried to force her into his car – the same vehicle used to run down the 25-year-old soldier.

She was only able to get away after pleading with him to let her go. The next she saw of him was on television, clutching a meat cleaver and ranting about why he had murdered Fusilier Rigby.

The shock of it made her confide in her mother for the first time about her rape ordeal at Adebolajo’s hands when she was just a young teenager.

It was the spring of 2001 when the woman, who has chosen to tell her story but wants to remain anonymous, met Adebolajo, then 16, when both were living in Romford, Essex.

Both were among a group of friends who would meet in the local park, and her first impressions of the teenage Adebolajo were of a ‘nice and charming’ youngster. She even once kissed him.

But that judgement was to change after he lured her to his house with a friend to smoke cannabis – which she says she had never tried before.

She remembers how he encouraged her to take deep drags on the potent skunk spliff he had rolled in his bedroom, until she started feeling woozy and passed out.

When she came round she found herself flat on her back on the floor, her trousers and knickers around her ankles, and Adebolajo raping her while his friend watched.

Panic-stricken, she pushed the teenager off her and yanked up her trousers before fleeing the house in tears. But when she got home she felt too ashamed about her ordeal to tell her parents, who had warned her not to hang around with Adebolajo. 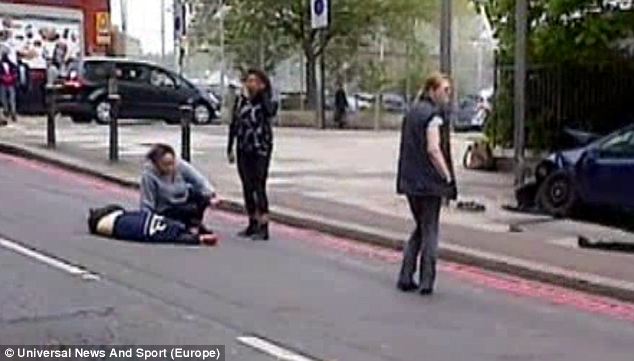 Angels: Women try to help Fusilier Rigby as he lies dying in the street after the savage attack

But that wasn’t the end of her abuse at Adebolajo’s hands. In another chance encounter ten years later, after she had left Romford to live in London, he approached her ‘all smiles’ on a train station platform.

‘He sat opposite me on he train and asked me what I’d been up to. Stupidly, I felt I had to talk to him,’ she told the Sunday Mirror.

‘Suddenly, he said loudly, “I’ve always wanted to f*** you.” It was so embarrassing.’

She described how he then reached over and put his hand on her knee, rubbing her thigh and gradually reaching further up her leg. Despite her protestations and attempts to manoeuvre herself out of reach, he carried on.

Adebolajo bullied her into giving him her phone number – ringing it straight away to make sure she’d not given him a fake – and leaned in to kiss her on the cheek before she was able to escape.

Her final encounter with Adebolajo came in May, just two days before he and fellow Muslim convert Adebowale butchered Fusilier Rigby