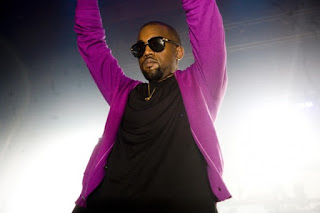 Kanye West retained his throne at the BET HIP HOP AWARDS, winning an impressive 7 awards, includingBest Live Performer and Producer of the Year, at the seventh annual awards held in Atlanta, Georgia.  2 Chainz had a great night too, taking home three trophies, including the People’s Champ Award and Rookie of the Year as well as performing at the show.   Rick Ross beat heavy-hitter Jay-Z for MVP of the Year, but Hov’s business acumen earned him them Hustler of the Year title.

Kendrick Lamar provided the biggest upset of the night, when the rookie rapper bested veterans Nas, Jay-Z and Kanye West for Lyricist of the Year, while Drake and Lil Wayne earned the top spot in the Video of the Year category for their “HYFR” clip.

In a night that showcased Hip Hop at its best, other highlights included: Meek Mill’s performance of “Amen” and “Young and Gettin’ It” featuring Kirko Bangz; Kendrick Lamar introducing a medley of his popular songs, “The Recipe” and “Swimming Pools”; G.O.O.D. music star 2 Chainz taking the stage to perform
“Birthday Song” and “I’m Different”; Rick Ross’ performance of “Hold Me Back” joined by Omarion for their single “Ice Cold” and Atlanta’s own T.I. entertaining the crowd with newest singles “Trap Back Jumpin” and “Go Get It”.  Future featuring Diddy, French Montana, Machine Gun Kelly and Uncle Luke had everyone on their feet with “Turn on the Lights”, “Same Damn Time”,“Wild Boy” and “Pop That”.

Rakim was presented and honoured by his peers with this year’s I AM HIP HOP ICON award for his seemingly effortless style and delivery that stems not just from Hip Hop, but from Jazz and R&B influences.

BET.com/HipHopAwards is the official site for the BET HIP HOP AWARDS 2012 where fans can visit to get up-to-date info on this year’s show and take a look back on past BET Hip Hop Awards.

Join the conversation on social media by logging on to BET’s multiple
social media platforms:

• On Twitter by using hashtag: #HipHopAwards; and following us
@HipHopAwards and @BET
• On Facebook by liking the fan page at facebook.com/HipHopAwards