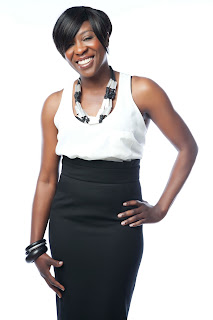 Rhoda Wilson started her career as an expert in the financial and energy sector in the United Kingdom. Her experience in some of the world’s most prestigious firms gave her the skills and ability to manage teams, develop successful strategies, and mentor individuals who aspire to be the best. She is an award winning inspirational talk show host – “The Rhoda Wilson Show” which tackles a range of issues with leading fulfilled and successful lives.
Apart from profiling a variety of guests on her show, Rhoda Wilson has appeared on a number of TV and radio shows including BBC World Service, VoxAfrica, Bang Radio and Colourful Radio. She has been featured on a number of print and online publications such as Nigeria Watch, New Africa Women, Women of African Diaspora, Afrostyle, AfroElle Magazine, and Twenty Ten Club and also selected as a “Member of The Week” by Business Fights Poverty.
Rhoda Wilson was a guest speaker at the Eighth Biennial Conference of Africa

Broadcasters, Africast 2010 where she spoke on Content Creation in a Digital Environment – Challenges and Prospects.

She was voted by the public for Best TV Presenter Award, BEFFTA in 2009; shortlisted for the Media Category of the Women For Africa Awards and Wise Women Awards in 2012; and won the award for Best Media Personality of the year at the Nigerian Entertainment & Lifestyle Awards 2012. This honour recognizes the contribution Rhoda has made to the world of Television and Media in the UK as a Nigerian in the Diaspora.
In 2012 His Excellency, President Jacob Zuma and The Government of South Africa invited Rhoda as a guest of the African Union to attend the “Global African Diaspora Summit” in South Africa, one of only 2 members of the British-African Diaspora to receive this invitation.
Rhoda Wilson is not only a presenter and TV producer as she has a book club which was launched in 2011 and a successful women’s Charity called African & Caribbean Women’s Achievements and leadership (ACWAL) foundation.
Watch, like and follow The Rhoda Wilson Show –